It is not uncommon to see scalpers trying to make a quick buck on online marketplace Carousell by selling sought after tickets at outrageous prices.

One user probably got more than she bargained for when she attempted to sell four tickets to popular podcast OKLETSGO’s stand-up show for a whopping $850, over four times what the tickets are worth.

According to the event’s poster, each ticket was priced at $45.

Raja Razie, who hosts the show with Dzar Ismail and Dyn Norahim, told Stomp that all 600 tickets for the show happening at the Kilo Lounge on Aug 23 and 24 were snapped up in just 13 minutes.

The trio posted an apology on Instagram to their fans who did not manage to buy tickets when they went on sale on Monday (July 29) at 8am.

“We have listeners telling us they were waiting since 5am [to buy the tickets],” Razie said.

When the hosts got wind from their listeners that someone was seeking to make a profit from the tickets, they took to social media to call her out.

They asked the user to remove the tickets from her account and tagged their lawyer, Mr Abdul Rahman from Abdul Rahman Law Corporation (ARLC).

Some listeners tried liaising with the user as well to try to suss out who she is. 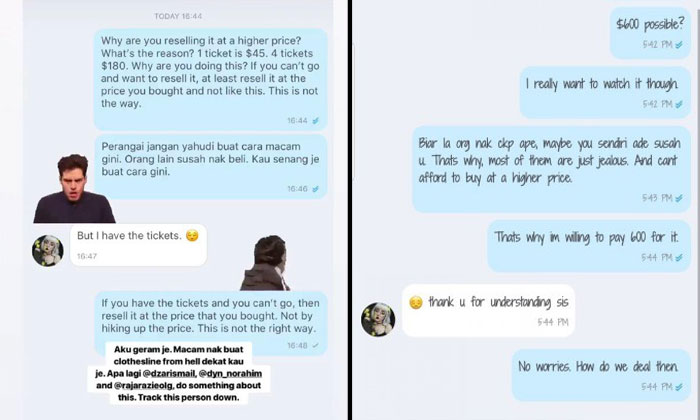 At 12.51am on Tuesday (July 30), the OKLETSGO hosts were informed that the user had finally removed her posting.

Fans who are disappointed that they could not get tickets for the show can take heart that the trio will be putting up another performance in November at a larger venue.

Certis security officer who helped blind man in Bugis: ‘Safety is important, but so are people’

Need a date for CNY? Man and woman advertise their services in hilarious FB posts

Romeo Tan, Xiang Yun and other celebs reveal how much they...

Wuhan virus: Andy Lau cancels all his 12 concerts in Hong...

Does enduring sleuth Nancy Drew get killed off in comic series...

BTS’ microphones sold at auction for more than 8 times the...