Home News Seller nearly loses her iPad to scammer who even asked her to...

Stomper Anonymous was thrilled when someone offered to buy her iPad without ‘lowballing’ her, but later realised that she nearly had nearly fallen victim to a scam.

Anonymous said she had listed her iPad for sale on Carousell last week when a user, whose account had only been registered for 19 days, expressed interest in it.

Both parties agreed on a price on $820 and Anonymous said: “I was thrilled upon receiving the offer as I didn’t get lowballed this time unlike many past experiences!” 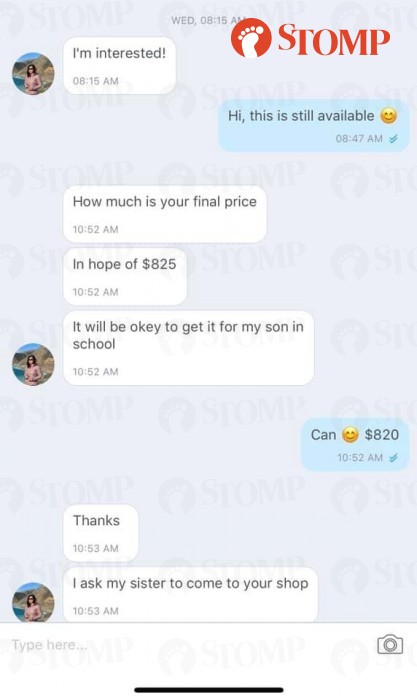 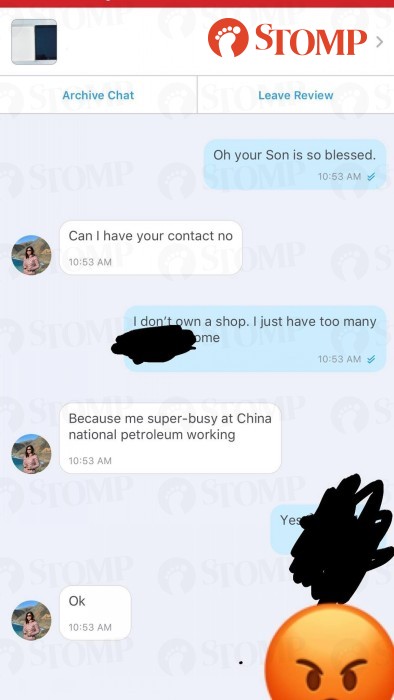 The supposed buyer said she wanted to get the iPad for her son but claimed to be working in China and therefore would get her sister to liaise with Anonymous.

Anonymous recounted: “The ‘sister’ (Singapore number) and the ‘son’ (Malaysian number ) then both contacted me on WhatsApp and had conversations with me regarding the product. I did not had any suspicious at all then.

“The son requested for photos of the iPad and even told me how excited he was on receiving it!” 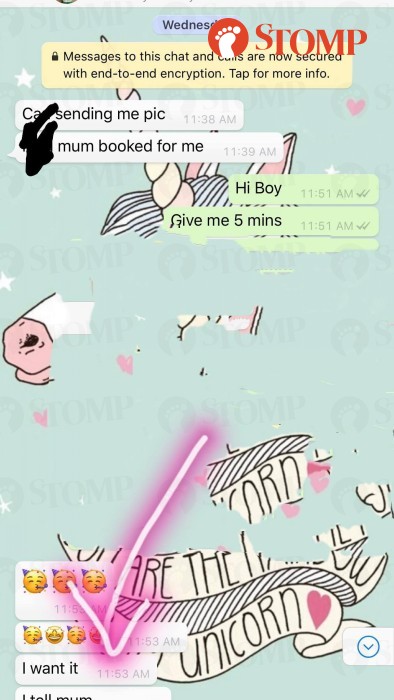 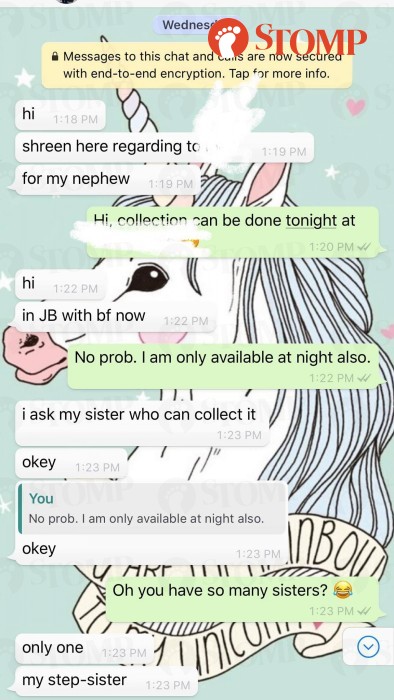 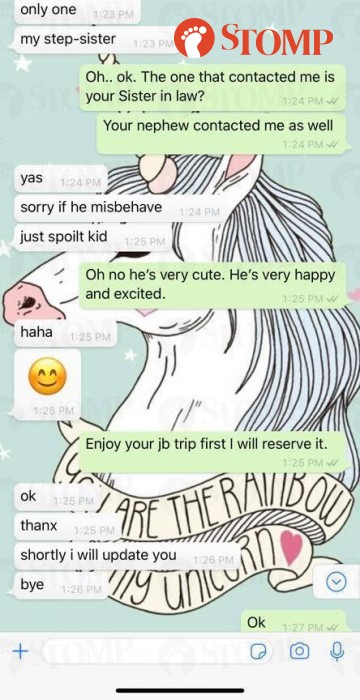 “When I casually told the ‘sister’ about it later, her reply was so realistic and relatable. She told me to ignore him as he was just a spoilt brat. This gave me the impression that I was really having conversations with a family,” said the Stomper.

“I only started to develop suspicions when I was told by the ‘sister’ that HER sister will collecting the item from me (one sister to liaise with me, and now another one?).

“I joked, ‘Wow you have so many sisters!’ and the reply I got was that it’s her stepsister.

“I didn’t question further and went ahead to arrange the pickup with them at night. However, they said it was too late and that they would pick it up tomorrow instead.

“All of a sudden that night, the arrangement changed. They said they would arrange for DHL to collect the item from me tomorrow instead.

“I was told that all costs for the courier would be paid to me before I handed over the item. I then acted accordingly to what was asked of me and filled in the forms she sent to me.” 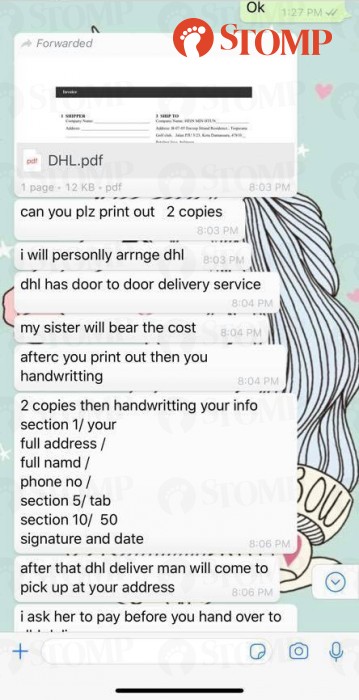 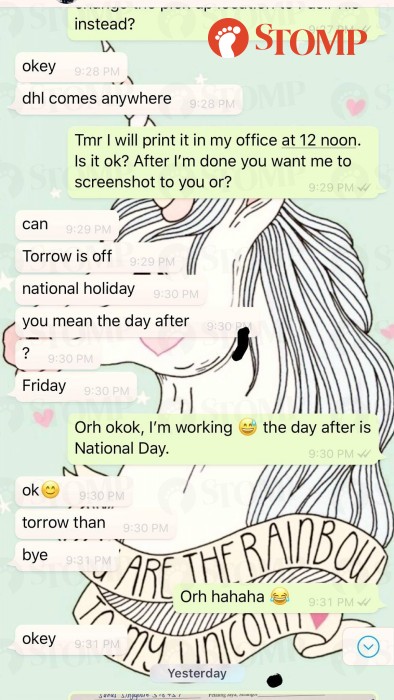 However, the Stomper’s suspicions was aroused when the other party appeared to have a mix-up over when National Day was.

She shared: “On Aug 7, she told me that the next day (Aug 8) was a public holiday due to National Day and that DHL did not operate on public holidays.

“Given DHL’s international scale, I doubted that services ceased on public holidays. And how would a local-born citizen not know Singapore’s National Day correctly as Aug 9?

“She then changed and acknowledged that tomorrow was fine. However, at the same time, the son contacted to tell me that the courier had been rescheduled to Aug 9.

“I got confused and went to clarify with the sister, who told me to ignore him as he was just a kid. Again, I thought this was a realistic and relatable reply.” 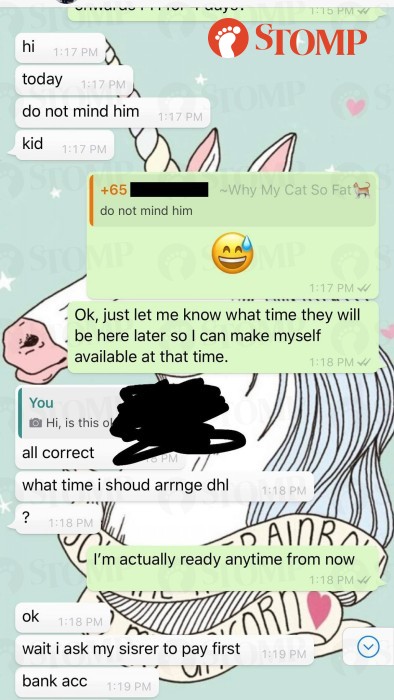 Anonymous said: “After being asked for my POSB account details for payment, I was told that her sister (who was based overseas) did not have a POSB account and thus the transfer would be made from other banks.

“I was sent screenshots shortly to confirm the transfer showing my name, account number, mobile number etc. Which I again thought was legit and real.

“I got more uncomfortable when I received a text from a local number (don’t banks have their own unique numbers when they do SMS notifications?) that the transfer had been made from Bank of America, and that the funds would reach me in 1-3 working days.” 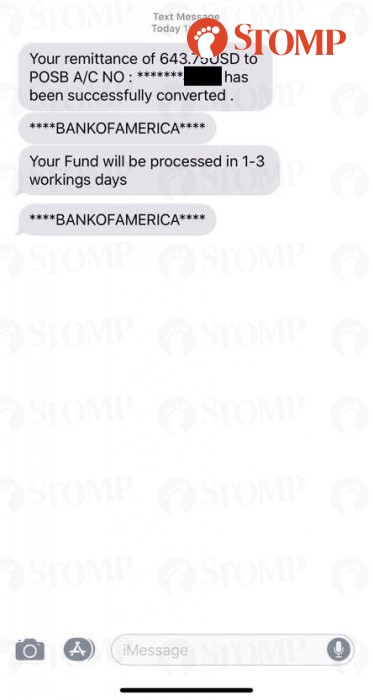 “During this point, I got worried as I was selling a high-value product. And since the funds would only reach me in 1-3 working days, I even had to pay DHL $50 out of my own pocket first,” she added.

“Although I was doubtful, I went ahead to draw my own money first, thinking that they did remit me the money but just that it would take 1-3 working days to clear.

“I then told my close friend about what was happening, but she was busy then and could not have a deep discussion with me. She, however, told me that I should not sell my iPad.

“I thought to myself that I couldn’t be so unlucky to be a scam victim over this. I left things as they were and did not take any action.

“The DHL pick-up was arranged and the deliveryman was supposed to collect the iPad from me later.

“I then received a text from my biological sister asking me something else, so I casually shared with her about what was happening with my Carousell deal.

“At that same time, the DHL courier arrived to collect the iPad. I was panicking as I had yet to fully digest the information shared by my sister and had yet to make my decision on the deal, but here was the courier in front of me.

“During that time, my sister continued to text me and told me that I should stop if I even had any slight discomfort.

“I then unexpectedly saw the delivery notes that the DHL courier was holding and one of it said *potential scam*. This made me more even concerned and worried. I was totally uncomfortable.

“The courier cost, which I was told would be $50, also had a slight difference at $52.43. The discrepancy further discredited the legitimacy of the deal.

“The courier personnel empathised with my concerns and fears, and assured me that I didn’t have to pass him the item now. He assured me that rearranging for another collection was very easy and could also be done during public holidays, so there was no need to rush the transaction.

“I called the sister and wanted to clarify things, but the dial tone was an overseas dial tone (wasn’t she based in Singapore?). My call was also totally ignored even though she was seen online on WhatsApp the whole time.

“I then texted her and asked if I could call her as the courier cost was different from what she had said and I didn’t want to bear the difference. Only then did she reply and pick up my call.

“When I spoke with her on the phone, she didn’t even have any reaction or reply when I told her that I didn’t want to send over the iPad before receiving the funds. I had expected her to be angry but she only told me she would check with her sister again.” 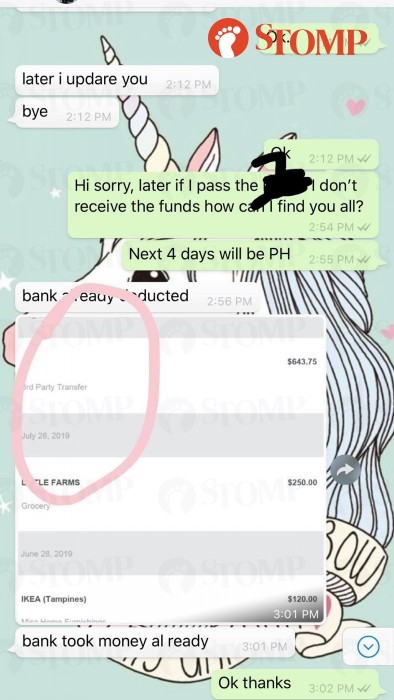 Her curiosity now sparked, Anonymous said she and her friend activated their ‘detective mode’.

She explained: “My friend conducted research based on the screenshots I sent, and it was found that the photos had been photoshopped as the transaction slip did not state the exchange rate, which is usually shown on legitimate transaction slips.

“The receiving address for the DHL courier was to a Malaysian resort that’s easily bookable on any travel platform.

“I quickly contacted Bank of America and was told that the Singaporean number which had updated me of the remittance was fake and did not belong to Bank of America!

“All in all, I am spending time to share my experience as I was minutes away from being scammed of my Apple product and cash of $52.43.

“I was lucky that during the last hour, I got scared of being scammed and saw sense. But the reality is that there will be many people who may not be as lucky as me, so I hope that everyone will be aware of this modus operandi used by scammers.

“Only you yourself can prevent falling for scams, so do practice caution.”

View more photos of the incident in the gallery.

Sheng Siong, SIA and S-Reit shares get a lift from Budget...