Local singer and actress Sandra Riley Tang has responded to backlash from netizens after a Tik Tok video of her applying concealer with her dog’s nose was posted in an animal lovers’ group on Facebook.

Stomper Jerald alerted Stomp to the video that was posted on the Dog Lovers@SG’s Facebook group page in the early hours of Tuesday morning (Oct 15).

In the video, Tang, who is also one-fourth of The Sam Willows, is seen applying concealer to her face and using her pet dog Nacho’s nose to blend it out.

Wtf this crazy woman is using her dog to apply her makeup?!! ???

Update: She’s a Singaporean actress & singer from the band The Sam Willows.

Undoubtedly, the video was made in jest but several netizens were far from entertained and slammed the singer’s actions. 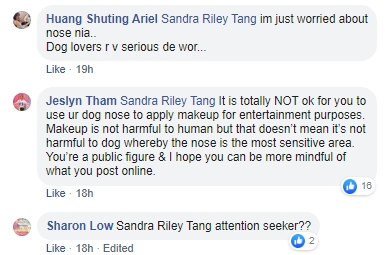 One commenter looked up the ingredients found in the Maybelline concealer Tang had used and alleged that at least one of them is unsafe for dogs as it can cause skin allergies. 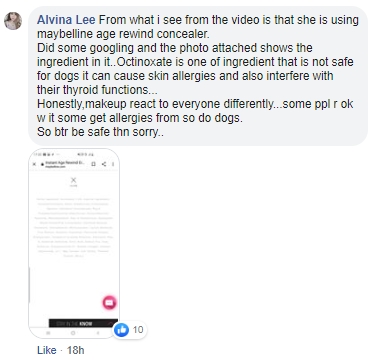 At about 3pm on Tuesday, Tang commented on the video to clarify that she would never do anything to harm Nacho and that his well-being was not compromised in the video. 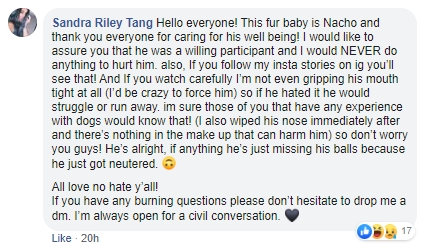 She wrote: “Hello everyone! This fur baby is Nacho and thank you everyone for caring for his well being!

“I would like to assure you that he was a willing participant and I would NEVER do anything to hurt him.

“Also, If you follow my insta stories on ig you’ll see that!

“And If you watch carefully I’m not even gripping his mouth tight at all (I’d be crazy to force him) so if he hated it he would struggle or run away.

“I’m sure those of you that have any experience with dogs would know that! (I also wiped his nose immediately after and there’s nothing in the make up that can harm him) so don’t worry you guys!

“He’s alright, if anything he’s just missing his balls because he just got neutered.”

She also welcomed netizens to message her directly for “civil conversations” on the matter.

Amidst the outrage, some netizens defended Tang and shot back at others for overreacting.

An animal lover herself, Tang also has a cat, cockatiel and duck.

She often posts photos of her them on her own Instagram as well as in a separate account she created especially for her pets.

Men argue over queue-cutting at McDonald’s in Clementi: ‘Your father’s road ah?’

Wealthy buyers continue to shop for luxury homes in S’pore even...