Stomper Anonymous has been estranged from his next-door neighbours for years, with the dispute reaching a breaking point last month after a heated confrontation.

Anonymous said he has been living with his wife and three young children at Block 711 Pasir Ris Street 72 for 10 years, while a family of four moved in next door six years ago.

The Stomper said: “Ever since they moved in, they have been inconsiderate. They keep slamming the door and gate (four people can slam four times, then slam again in the evening when they are back from work).

“They have two grown-up daughters who love playing the piano loudly without thinking about how it would affect my babies, disturbing my children’s nap and sleep all the time.

“They also frequently dirty our corridor with dog pee and droppings without cleaning up after themselves, to the extent where I had to clean everything myself many times.

“When they renovated their toilet in 2017/2018, they allowed their workers to place all their dirty and messy stuff outside my corridor without cleaning up afterwards.

“The man of the house also scolded my wife unreasonably when she went over to ask why he allowed his workers to mix cement powder outside our house and dirty our corridor.

“Whenever we opened the door, dust would fly into our house immediately. My neighbours did not consider how the cement dust might be easily inhaled by my young children.

“I did not call the police against them back then as we were trying to be nice neighbours.”

Despite this, his neighbours continued behaving “inconsiderately”, according to the Stomper.

Anonymous said: “They frequently loiter and eavesdrop outside our unit whenever they hear noise. But households with many young children like mine tend to be rowdy.

“Their actions are so ridiculous, causing us to be very stressed and worried.”

Anonymous said his neighbourly woes escalated when he was issued a Stay-Home Notice (SHN) by Sengkang General Hospital on May 20. 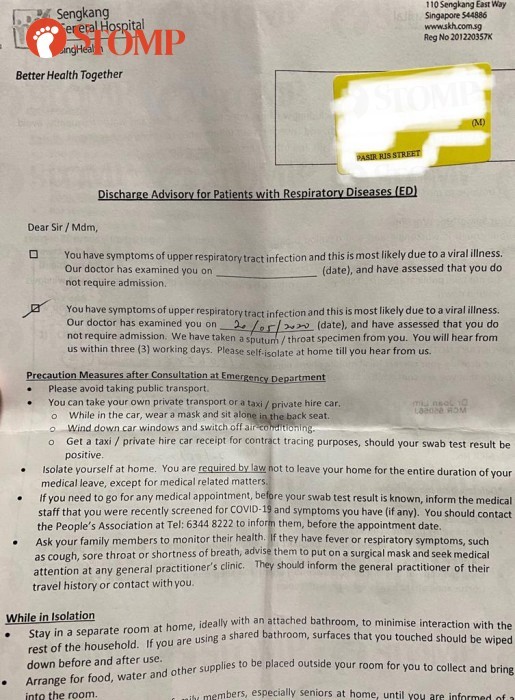 The Stomper shared: “On the morning of May 22, my wife went over to try and reconcile (make peace) with our neighbour – the wife.

“My wife patiently told her about our concerns and worries for our family (especially for our three young kids with low immunity, making them prone to bacteria and viruses), as well as informed her about my SHN issued by the hospital.

“My wife was hoping our neighbours would stop meddling in our family affairs. Other than being nosy and loitering around our corridor many times, they had also previously called the police on us on May 6 after falsely accusing us of mistreating our children. Police officers who came to visit us that day have seen and verified that our children are truly well and fine.

“At around 1.55pm on May 22, my neighbour – the husband – knocked very loudly on my front door, claiming that I had harassed his family.

“Both my youngest toddler and one-year-old baby were startled by the loud knocking and cried. I had to open the door in order to make him stop banging on it.

“He wasn’t wearing a mask, and was furiously accusing and scolding me. He made multiple attempts to provoke me into a fight, to the extent of reaching his entire arm past my gate and attempted to grab and assault me.

“Fearing for my kid’s safety, I did not open the gate to confront him. As this is not the first time he had behaved so aggressively against our family, I decided to record a video of him attempting to assault me.”

The police confirmed with Stomp that a report was lodged, adding: “Both parties have been advised on their legal recourse.”

Anonymous said: “We are pleading for help about our unreasonable neighbours regarding this incident, which has clearly gone beyond our safety limits and what we can tolerate.

“Is this considering bullying? He challenged to fight with a sick man like me and even threatened us with a lawsuit even though he knows all my three young children and how two of them still need to be spoonfed. He even scolded me stupid idiot in the video.

“Going into a lawsuit will be disadvantageous for us as it will be costly and we have three very young children.

“Why can’t our neighbours have more compassion towards those who have many mouths to feed with only a sole breadwinner in the family?!

“Furthermore, we already have our hands full with my wife taking care of our three children 24/7 by herself. She has to do household chores, including the laundry and cooking, without any helper while I’m busy working.

“Do you think we are so free to harass other people?

“Why can’t they leave us alone and stop being such nosy neighbours, creating only more stress for both my wife and me?”

According to The Straits Times, friction between neighbours has increased with families cooped up at home during the circuit breaker period.

Noise, litter and cigarette smoke are among the key complaints.

20-year-old woman’s 3 brothers in fight with her BF, 5 men injured and arrested

Over 10,000 firms have tapped ESG schemes for growth and transformation...